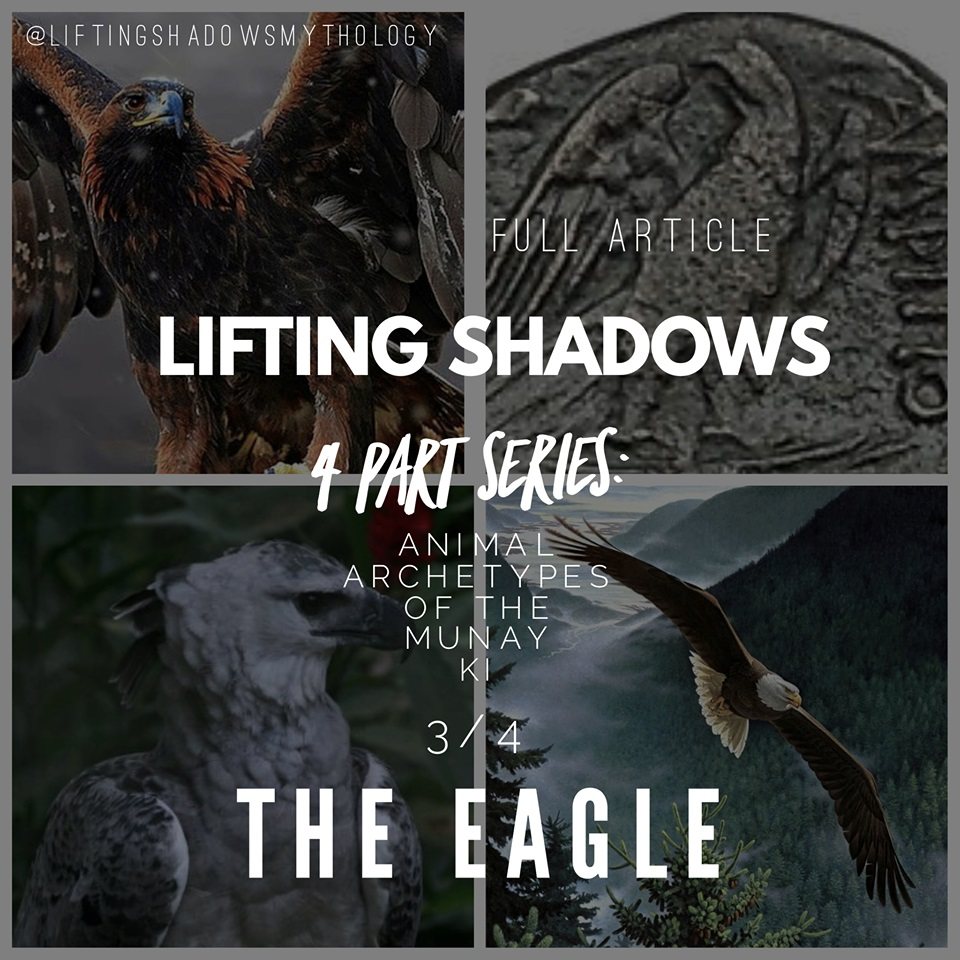 In part 3 of our series regarding the animal archetypes of the Munay Ki, we are going to be taking an in depth look at the Eagle..sometimes lovingly called the freedom glider. We will explore the Eagle’s role in the Munay Ki and fly..er..I mean dive into some other aspects of this incredible noble and powerful creature.

As a refresher, The Munay Ki is a set of 9 empowerment rites that have been passed down from the Q’ero shamans in Peru. “Munay Ki” translates into “Energy of Love”. It is believed that these rites are our birthright. That is the very short version of the Munay Ki, it is truly an incredible area of study and practice. The animal archetypes involved in these rites are certainly powerful when understood and acknowledged in our daily lives.

In the Munay Ki, The Eagle is associated with the direction of the East. East represents the place of the rising sun, perspective, vision and clarity. These are just a few of those things. In the Munay Ki, The Eagle helps us to see the mountain tops and new heights that can only be seen from the highest outlook. We are taken under the wings of the Eagle to learn to fly and soar with great spirit, up close and fearlessly. This allows us to use our co-creative power with love and grace.

The Eagle also teaches us to see with the eyes of our heart. Not just ourselves, but others around us, Mother Earth and Father Sky. When we call upon the Eagle’s influence, we have an opportunity to get the broadest perspective and sharpest clarity regarding our destiny. They can teach us to see the entire view of life and not get slowed down by unnecessary details. Eagle pushes us out of our comfortable nests and we learn to soar!

Eagles have a rich background in Mythology as well. Perhaps one of the most well known Eagles in Mythology comes to us from the Greek Mythos. The Aetos Dios “Eagle of Zeus” The giant golden Eagle that served as the personal messenger of Zeus. There are a couple of versions of the tale that describe how this Eagle came to be at his side. Some say this Eagle was once the great king Periphas. He was incredibly popular and loved. In his jealousy, Zeus was said to have smote him with a thunderbolt, but Apollon stepped in and instead turned Periphas into the eagle, placing him at the throne of Zeus. Another version describes Zeus adopting the Eagle after it came to him just before the war with the titans, indicating a victory. It is now represented by the constellation Aquila.

Many Celtic myths speak of the great eagle and it’s nobility. An old Manx name for the eagle is “Drein” which means “The Druid’s Bird”. There is a tale that tells of all of the birds having an air contest for sovereignty. The way they were going to judge this contest was by seeing which bird could fly the highest. The eagle was the clear winner until the last second, when a tiny wren revealed itself hiding in the Eagle’s feathers and jumped out to win the race. It is said that the wren is held highest simply because of it’s cunning ability!

In other traditions, the cry of an Eagle was often taken as a symbol of something significant about to happen such as the birth of hero or the dawn of a new era. An eagle by itself on a crag (cliff) was thought be a sentry or a watcher, warning of an impending enemy attack. A pair of Eagles together was seen as a sign of peace and harmony.

Native American traditions respect the Eagle immensely. The eagle is said to represent strength, honor, wisdom, freedom and other notable traits. Receiving an Eagle feather during ceremony is an incredibly high honor. The feathers of Eagles are common in high ranking head dresses and bestowed to warriors for acts of bravery.

When it comes to our personal journeys, we can learn much from the Eagle and use its influence to help guide us. The eagle is a great messenger, as are most power birds, but they are believed to carry our prayers directly to the Gods and bring back visions and gifts for the people. I believe the Eagle shows us to go directly to the source of our answers. Be not afraid to speak directly to someone, ask for what you need or afraid to walk right into that job you’ve been wanting. Seek the source with confidence and receive the gifts for you and others in your life that are close to you or under your wings.

Eagles are known for their ability to thrive from the earth and what is around them. This is a principle in not becoming too attached or afraid to make a move when it feels right. Earth provides for us if we have the confidence to work with it and sustain ourselves. Whether it be food, provisions, a job..if we work with the earth and its energies, we can always thrive. Instead of seeing ourselves tied to a massive anchor that we manifest in our minds, we can shift that perspective and realize that we are truly free and have the power to embody that, soaring to new heights with purpose and confidence.

Not only do Eagles have incredible vision, but have exceptional hearing as well. In our own lives, we tend to believe what we can see with our eyes, but when we learn to open up our other senses, physical and spiritual, we may be able to tap into new perspectives and outlooks. This is the primal instinct and intuition we have always had, but have largely ignored in the recent times. Can we get back to the basics of our powerful human abilities by drawing upon the influence of the Eagle to trust ourselves and our instincts?

The eagle teaches us patience and how to see a situation from more than one perspective. They are often perched in a tree for hours at a time, analyzing and surveying the landscape. When the time is right, The Eagle will make a move toward a greater destiny and bring the darkness to the light.

My name is Josh Hammond. I am an avid student of Mythology, Ancient History, Metaphysics, Symbolism and other things. I run the Facebook page, Lifting Shadows Mythology. I am honored to be contributing to this incredible website. Thank you!

3, 2, 1, Go! The Productivity Brain Hack That Works Every Time

What Is My Spirit Animal? Beginner’s Guide