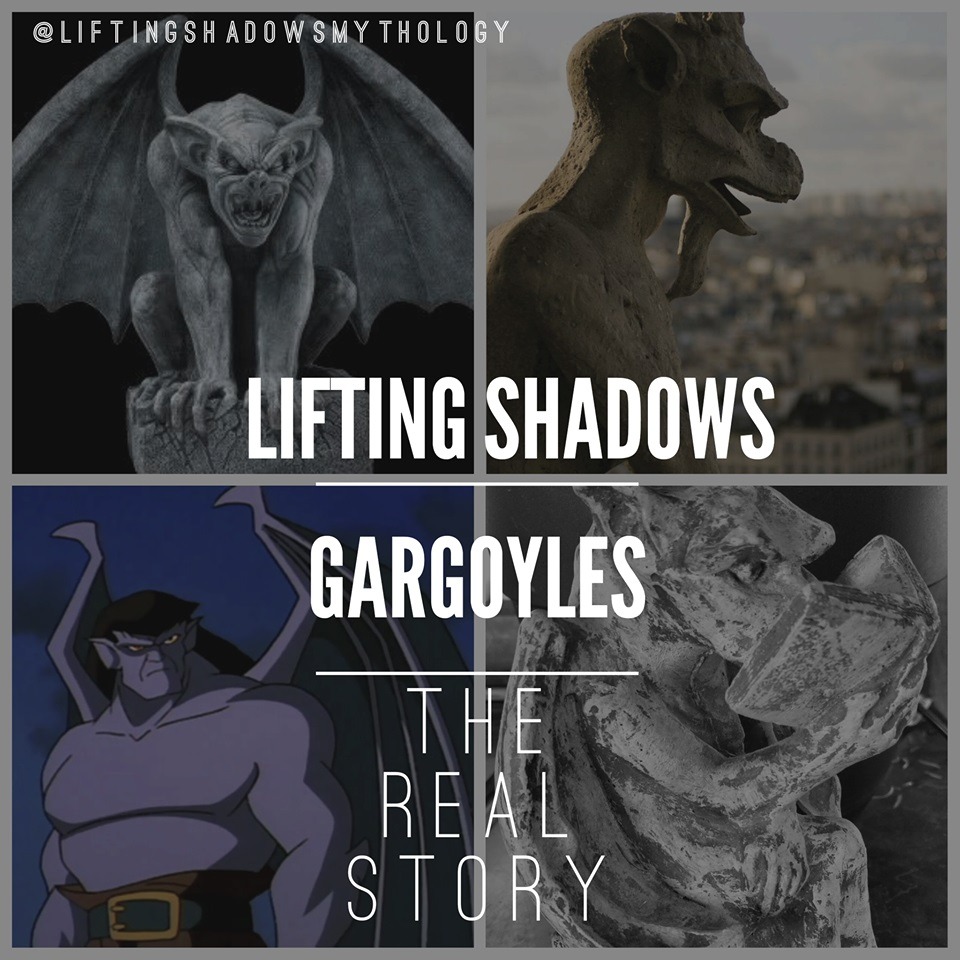 Today, I’d like to shed a little light on our friends, The gargoyles. I feel that they, like many other creatures of our areas of study, are misunderstood and they deserve a chance to be properly represented. Why do gargoyles get such a bad rep? I mean, look at them! They’re awesome, protective, creatures of mystique and wisdom. I mean, hell! They even had their own badass cartoon show in the 90’s! Don’t tell me you don’t remember it. Luckily, we won’t be drawing our source material from that show or the 1972 slop job of a tv movie, but that doesn’t make them any less awesome.

So when you hear the word “Gargoyle”
, you might say, “They’re demons” or “They’re scary, but aren’t they on churches?” “What the hell is a gargoyle?” Or you may just think about the noise you make when you’re using mouthwash. Whatever comes to mind when you hear the word, today. We’re gonna give them the proper representation they deserve.

The word “Gargoyle” come to us from the French variety of language, “Gargouille” which roughly translates into “Throat”. Why? Because Gargoyles were originally carved as spouts to divert water away from buildings that were constructed heavily of mason work, because the water would seep in and erode away the mortar, which means big time fall-down-go-boom. Often there were multiple gargoyles on a building to help divert the most water possible to prevent damages. A trough is carved into the back of the creature, so water can flow out of the mouth.

Well no wonder they look so pissed off! Carving into the back of their necks, performing medieval psycho surgery, likely without proper consent? I get it, gargoyles..yikes. But there’s more to the story…

The gargoyles we just talked about are “functioning gargoyles” if you will. Meaning they divert the water away and help keep the integrity of the building. But the gargoyles we most commonly see talked about are the beast like, usually winged creatures that have been the source of controversy for many years. I’m talking like, since the 12th century. They aren’t even called “Gargoyles”..get this. They’ve been labeled as a grotesque, a chimera, a boss and other charming monikers..even a hunky punk in certain parts of England..woohoo.

So why are they labeled as such? Where does this rep come from? Well let’s look into the past, say.. in the early 600’s AD. A french legend tells of St. Romanus and his saving of Rouen from a monster called “Gargouille” Sound familiar? Sometimes this is referred to as “Goji”. In the myth, This Gargouille is said to be a winged creature with an elongated neck that breathed fire…hmmm…sound familiar? Why didn’t they just call it a dragon? Oh yeah..beacuse that word wasn’t in style yet..not until about the 13th century..So I guess they get a pass. Back to the legend, it is a little unclear as to how he subdues the creature. Some say he used a crucifix..others claim he had help from a condemned man who volunteered. After bringing the monster back to Rouen, it was burned, but the head and neck would not perish in the flames because it had been tempered by it’s own fire..so being the creative folks they were, they mounted the head of the Gargouille on the newly built church to ward off evil spirits. So they had a good relationship with the church in a sense..but then along came another rough road for the Gargoyle..

In the 12th century, St Bernard of Clairvaux was very famous for speaking against the Gargoyles mounted on the church:

“What are these fantastic monsters doing in the cloisters before the eyes of the brothers as they read? What is the meaning of these unclean monkeys, these strange savage lions, and monsters? To what purpose are here placed these creatures, half beast, half man, or these spotted tigers? I see several bodies with one head and several heads with one body. Here is a quadruped with a serpent’s head, there a fish with a quadruped’s head, then again an animal half horse, half goat… Surely if we do not blush for such absurdities, we should at least regret what we have spent on them.”

Damn dude..tell us how you really feel!

I believe these creatures have been represented as evil and scary for too long. I see them as great protectors that show us the virtue in not judging a book by it’s cover. We can look at the appearance of these creatures and be turned away, but what are we missing when we do this? Why are we limiting ourselves and our perspective ability based on the outward looks? Can this symbolize other aspects of life? I see gargoyles like a filter. If people are turned away by them because of their initial reaction to the appearance, and they are so quick to cast a judgment, perhaps there is a lesson for them to learn before they receive the true beauty within it.

Do we have our own gargoyles? Perhaps. The dragon as we know represents our ego in certain myths. In the case of Romanus, the dragon was almost completely destroyed by the fire, but a part of it remained, almost as a way of saying not all elements or aspects of our ego can be completely burned away because we have tempered them over time with our own thoughts and ideas. Instead of rebuking these qualities..and I say qualities, not imperfections because I believe that there are good, essential parts of our egos that are essential to us as individuals. we instead use them to serve our higher good. Working with these qualities instead of trying to decry their existence. Mounting them to our temple to help protect us from erosion and potentially negative influences.

I know for me, I wear leather bracelets, dark clothing, listen to heavy metal, appreciate the macabre and the morbid and even wear eyeliner sometimes. People have been turned off immediately by my appearance or have made judgments from those things. I believe it may help to filter those who are not ready to look beyond the outside or see from more than one perspective. I even know an individual who wears a Bindi, which is a piece of jewelry worn on the 3rd eye chakra or the anja. Originating in India, but very popular and significant in all areas of the world. They were discriminated against in the workplace for having it and ultimately realized that this wouldn’t be a good fit for them. Perhaps the “Gargoyle” like quality of the Bindi protected them from being in a job where those feelings would be permeating. Even I myself am not too proud to admit that I have done this even with others! Now I don’t believe that that we should be looking to ward people off, but if it happens, we may be thankful that the right time of connection with that person may come later when both parties are ready.

Can we grasp the principle of not negatively judging something based on appearance by looking to the gargoyles? In our interpersonal relationships? Careers? Cities? Environment? Has your perspective been affected at all after reading this?

My name is Josh Hammond. I am an avid student of Mythology, Ancient History, Metaphysics, Symbolism and other things. I run the Facebook page, Lifting Shadows Mythology. I am honored to be contributing to this incredible website. Thank you!

What is Mythology? -Mythology For the New Generation

All The World’s A Stage